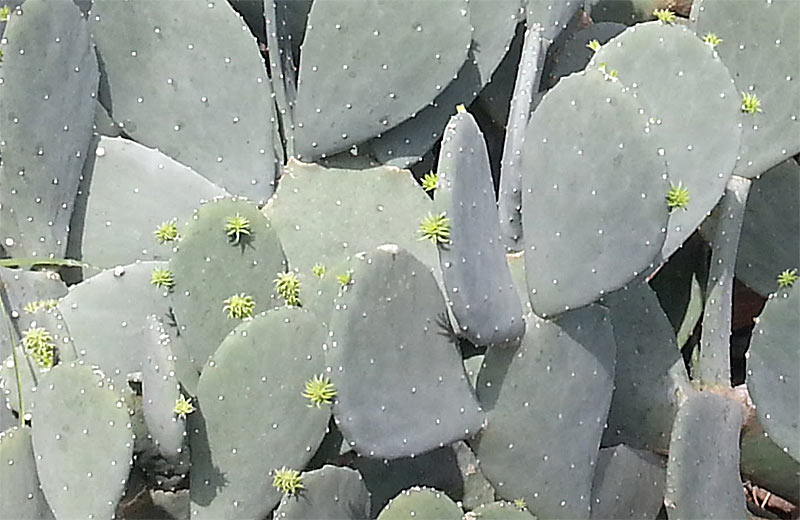 Cacti are an interesting and diverse group of plants. Cacti are one example of succulents. All cacti are succulents, but not all succulents are cacti. Any plant with thick, fleshy leaves, stems, or roots that hold water is a succulent. 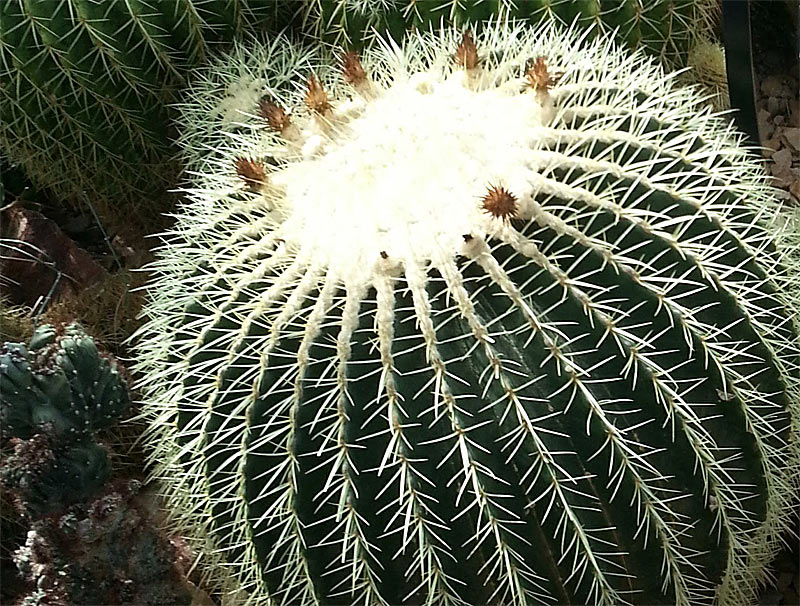 Most succulents come originally from hot, dry places that only get water intermittently. In order to survive, they must collect the sparse rainfall and store it. The differences between cacti and succulents will be discussed later in the article. There are between one thousand and two thousand species of cacti. But, there are many more thousands of succulents that are not cacti, although we may call them that. For example, the plant “crown of thorns” is not a cactus, even though it has large, sharp thorns. Other examples of succulents are the jade plant, the century plant, kalanchoe, agave, yucca, aloe, and bromeliads. The prickly pear and the Christmas cactus are two of the few cacti in Florida with a common name. But all cacti have scientific names. All cacti are all in the Cactaceae family.

They come in many shapes and sizes. Some cacti are tall and straight with no of a few branches, while others are like small round rocks growing close to the ground. Some arelike barrels, some small and somelarge, sometimes growing singly and sometimes bunches of them tightly grouped together. Some cactiare flat, some rope-like, while others are round-like balls. Spines may be many or few. All cacti, except one (Rhipsalisbaccifera subsp. horrida), grow only in the Americas (North, South, Central and the Caribbean), at least before people started moving them around the world for their gardens. All of them are stem succulents: they store water in their stems and nowhere else. Most do not have what we consider leaves. The leaves of cacti have, over the millenniums, become highly modified into spines.

Opuntia is a genus in the cactus family

Without leaves, cacti do photosynthesis in their stems. Most cacti live in hot arid climates with high daytime temperatures and low nighttime temperatures. A few cacti live in the South American rain forests. Many of these are long and thin and grow in trees. What separates cacti from other succulents with spines or thorns? The primary difference is in the placement of the flowers and spines. These features are grouped in small pads called spine cushions, or areoles. Even cacti without spines have areoles. All cacti, and only cacti, have areoles. Areoles are a small radial structures, which are arranged in a regular pattern, usually along either a rib or equally spaced on the face of the cacti. An exception to this rule is the Christmas cactus. In that cactus, the areoles, with their spines and flowers, are on the tips and edges of the flat stem. A second difference is that the flowers of cacti are different from all other flowers. They are unusually conspicuous. The differences between the cacti flower and other flowers is very technical, it involves the structure of the parts of the flower. We can not go into those differences here without explaining a great deal of technical information.

There is only one cacti native to Polk County, the prickly pear or Opuntia humifusa, but there are thirteen others native to other parts of Florida. There are other members of the Opuntia genus that are native to much of the continental United States. Of the species native to Florida, at least two are endangered. One of those is called “Queen of the Night” because it blooms only at night. It has a wonderful perfume that it uses to lure pollinators. Another species grows in trees and is rope-like. It can grow up to 23 feet in length. There are several other cacti that grow well here in Florida. Most do better in South Florida because they are sensitive to freezes. Cacti can be planted in beds, either singly or in groups. Often the space between the individual plants is covered with small stones or a ground cover. The ground must be allowed to dry out so moisture retaining mulch is not a good idea. Another way to plant cacti is in containers, usually shallow ones like hypertufa potsor bonsai pots. Arrangements of cacti in containers can be beautiful, but do require maintenance as some cacti grow large. Cacti can be difficult to handle because of their spines. Heavy gloves are a necessity when working with cacti. Cactican be a really interesting plant to grow, either in a cactus garden or in containers. They don’t require much maintenance, are extremely drought tolerant, and many can stand the hottest sun.

Cactus And Succulent Identification and Care